We didn’t get to do:

We wanted to go to Chojugaokatsutsuji Park 長寿ヶ丘つつじ公園, but unfortunately, due to the major earthquake that they had in April 2016, I didn’t realise that some of the roads were closed (although our car GPS was very updated and had all the information) and I planned the route differently. The detour would have taken us a lot of time, so we had to scratch that off our itinerary. The Mt. Aso ropeway was also closed due to the earthquake, so we bypassed that area. I would really love to go back to see all these again! We did manage to stop by some lookout points. 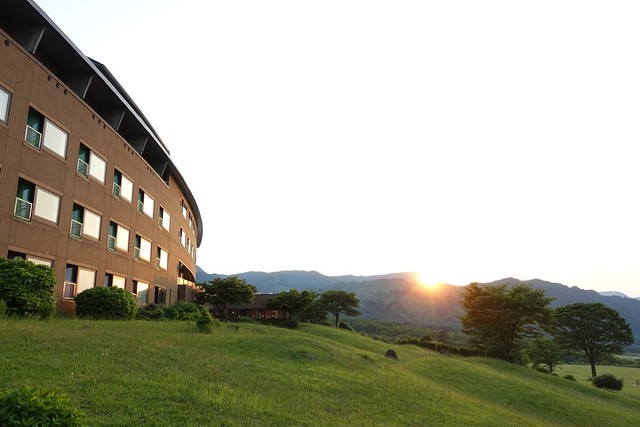 Hotel Greenpia Minamiaso boasts the only onsen with views of Mt. Aso. Certainly the views are pretty fantastic, but actually you can only see Mt. Aso from a tiny corner of the onsen. Compared to Ryokan Yamamizuki, I much preferred the latter.

The resort is large, but rather retro (I’m being nice), and in the middle of nowhere. The rooms are large and comfortable. The grounds are rather large and going to the onsen in the evenings was sometimes creepily quiet.

The kids loved playing in the sports hall, with bicycles and all kind of vehicles, ping pong, soccer balls, and also where they have washing machines, a karaoke and a mahjong room, but like everything else here, it is quite dated, almost like stuck in a time warp, but in a creepy way. I did not choose this hotel.

The dinners are semibuffet and pretty average, although everyone loves Japanese food in general.

The Takachiho Gorge dates back to 100,000 years ago, and makes for very stunning photos. It is a “must go”!

When we drove towards Takachiho Gorge we were directed to a carpark at one end, and had a nice stroll over to the part of the gorge where you can take a boat ride. There is more than 1 car park but each are quite small. We enjoyed this stop, especially since we got there when there was no queue for the boats. When we left there was a long line of people waiting for boats to come back! There is a fair amount of steps and walking here.

After the Gorge we couldn’t decide where to go for lunch. Just near the boat area is a noodle restaurant where you can “catch” noodles floating by you in a kind of longkang. However instead we drove to lunch at Nagomi Takachiho 高千穂牛ステーキ. We found this place on Google and TripAdvisor, and the Takachiho beef here was really out of this world. Ok literally it is from Takachiho and not outer space, but it was so so good and so reasonably priced. I am drooling just thinking about it.

I’d read about Kamishikimi Kumanoimasu Shrine and how it was linked to Izanami and Izanagi, the two deities who created the islands of Japan. Since we had time and it was only a slight detour, we decided to give it a visit. See more information from Tripadvisor here. There are a lot of uneven steps here, so do avoid if it’s been rainy. Revered as a spiritual “hot spot”, it might be a little creepy to some, but thankfully it was very sunny, there were construction workers (mini digger in tow) and one Japanese couple who were also visiting the shrine. Some of the photos of this shrine available on Google are just mind boggling.

After that it was back to Greenpia for another uninspiring meal. Ok at least it is semi buffet and they have soft serve local ice cream and their famous yoghurt for breakfast.

You can read about Chikae from my previous post. We enjoyed the experience dining here so we brought the family to try it out. Do plan your trip carefully as the line can get pretty long. We arrived shortly after half an hour before store open and had to wait for the second round of seating.

We arrived into the city amidst some weekday traffic, I would have liked to planned to arrive in the city on a weekend when the traffic is much lighter!

At Nishitetsu Grand Hotel we booked a Japanese style room for the 5 of us. It was certainly the most luxurious hotel on our trip, with 2 super single beds and a tatami area for futons. It had TWO bathrooms and since it was the birthday of a family member, we were able to gather in our room for a short while for cake cutting.

As the SQ flight leaves early at 10am, we left the hotel at 730am on a large Panda Taxi mini bus, which I wrote about on our previous post. As a party of 14, we booked 2 mini buses for 5000Yen each. Sure, you can take a train or public bus to the airport, but the both didn’t make sense for us: imagine having to walk to the train station with 14 pax, get down to the platform, BUY train tickets for 13 pax (since my 4YO doesn’t need one), get ON the train, get OFF the train at the DOMESTIC terminal, get ON a bus from the domestic terminal to the international, not forgetting this is early morning. You get the drift.

Fukuoka airport has a small selection of duty free which includes the usual Hokkaido potato, Royce chocolates, etc, and apparently has a decent collection of sake and whiskey. They also have one boutique, which is Issey Miyake’s Baobao and Pleats Please. I heard at other Issey Miyake stores around Japan there is always a queue but not here!

Our trip was a very short 5 days (not including the red eye), because my dear husband thought that it would be “enough”. Rest assured he will never hear the end of it from me about “that time” he thought 5 nights would be “enough”. Just writing up this post makes me wistful to go back!

We loved the rural and rustic nature of the Mt Aso area. We saw many bikers enjoying their road trips too. We drove through many small towns, many small lanes and enjoyed the fresh air and beautiful weather. We drove up and down mountain roads, marvelled not only at nature’s beautiful creations but also the destruction of the earthquake were stark reminders that nature can just be as easily destroyed as it can be created.

Overall it was a wonderful trip and definitely not as stressful as our Epic European trip (thank goodness). My FIL has already asked when we will return. I’m sure all of us will be back in Japan, and definitely back in Kyushu.

You might also like to read the Kyushu with Kids 2017 – Part 1 – Mt Aso and Kurokawa from this trip:

And more on our Fukuoka trips:

Read more about me, contact me, or read the disclaimers here.

All views expressed here are my own, because, I'm just very opinionated. If you think I've stolen your idea, maybe it's just a case of great minds think alike? :) Any resemblance to other actual content, living or deceased, is entirely coincidental, and would be very freaky.

Copyright © 2015
All Rights Reserved. Unless otherwise stated, the copyright of all work contained in this website is owned by Mummy Ed. Copyright and other intellectual property laws protect these materials. Please do not reproduce any text or pictures, in whole or in part, in any matter, without my written consent.